Leaving from Deadwood we drove south on Rt. 385 through the Black Hills towards Mount Rushmore.  As we drove south the Black Hills became more and more beautiful, with twisting roads winding their way through towering peaks of granite.  No wonder this is the area that they chose to build the monument commemorating the founding, growth, preservation and development of our nation.

As we approached Mount Rushmore we were a little surprised that our National Park Access Pass didn’t gain us entrance to the site.  Instead we paid the $11.00 parking fee like everyone else.  Luckily Brienne qualified as a car instead of an RV.

We quickly headed to the visitors center to learn more about this amazing sculpture and really enjoyed the film that detailed how the mountain was shaped into four faces.  It certainly is an impressive and timeless piece of art.  Given current conditions, the faces are expected to erode at about 1″ every 10,000 years.  Like I said…Timeless.

The four Presidents depicted on the monument were chosen for their significant roles in our nations history.  George Washington signifies the struggle for independence and the birth of the Republic.  Thomas Jefferson signifies the territorial expansion of the country.  Abraham Lincoln signifies the permanent union of the States and equality of all citizens. Theodore Roosevelt signifies the 20th century role of the United States in world affairs and the rights of the common man.

After a couple of hours at Mount Rushmore we headed further south along the the impressive scenic drive called the Iron Mountain Road.  This and it’s sister drive, The Needles Highway, were constructed in the 1920s-30s by Governor Peter Norbeck with the goal of creating the most scenic road in all of America.  Designed to be driven slowly, this road utilizes switchbacks, curves and pigtail bridges to allow drivers and passengers the opportunity to take in all that the Black Hills has to offer.  The pigtail bridges are, for lack of a better comparison, like a big circular staircase, providing a means of gaining (or losing) a lot of altitude in a very limited amount of space.  Additionally the Iron Mountain Road squeezes through several tunnels that each frame Mount Rushmore in the distance.  It’s quite a drive and definitely worth a visit if you ever find yourselves in the Black Hills.

The Iron Mountain Road lead us right into Custer State Park where we spent the night.  The following day we spent some time in their visitor center where we learned about their impressive bison herd of over 1300 animals.   A drive around the “wildlife loop” provided us an opportunity to see pronghorn, bison, prairie dogs and a small herd of elk.  For the kids the most memorable creatures were the “begging burros” that ate carrots from their hands.

We certainly had a wonderful time in the Black Hills and should have stayed longer, but as is often the case, we had somewhere else that we had to be.  So, down the road we go… 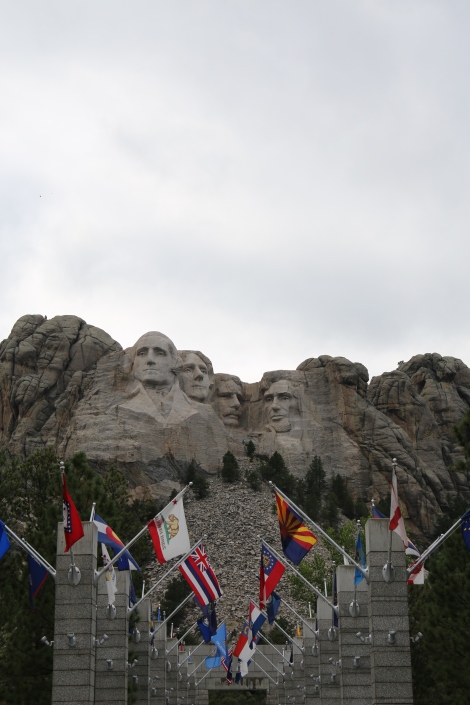 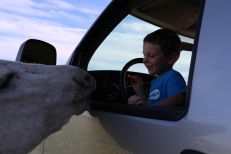 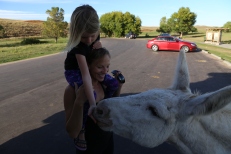 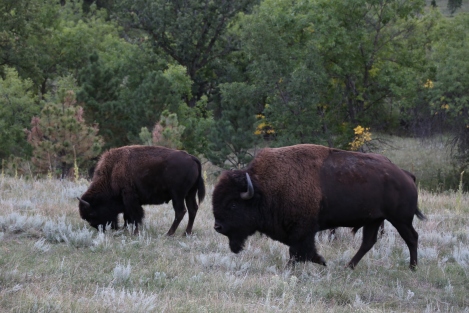