If you’ve seen the HBO series Deadwood, you know what I’m talking about.  If you haven’t,  it’s worth a watch.  Although the actual storylines differ slightly from the script, most of the characters were in fact real residents of Deadwood and many are buried in the cemetery overlooking Deadwood Gulch.

Of course Deadwood looks a little different today than it did in the early days of the gold rush.  Many of the business names are the same, but following several devastating fires most of the downtown buildings were rebuilt with brick and mortar.  Today’s Deadwood relies on tourism and legalized gambling to keep the stories of it’s boomtown past alive.

We pulled into Deadwood on a rainy evening just before sundown.  From a camping standpoint that is just about the worst case scenario.  As much as I love our adventure lifestyle, it’s no fun to set up camp and prepare and eat dinner while getting soaked in the dark.

Plan B was a call to several historic Deadwood hotels and we were lucky enough to score a room at The Franklin Hotel, one of the first luxury hotels in Deadwood.  Of course by today’s standards it’s not high end luxury, but the novelty of having a piano in each room entertained the kids for hours.

The next day we did a little shopping, watched several gunfights in the streets and witnessed the murder of Will Bill Hickok who was shot in the back of the head while playing poker in Saloon #10.  The hand he was holding, Aces and Eights, is still referred to as the deadman’s hand.

Later we caught a bus tour of town and visited the Adams Museum where we learned more much more about the true history of Deadwood and life in the Dakota Territory.  In order to gain a better understanding of how the gold was actaually mined, we finished out the day with a tour of the Broken Boot Mine.  Morgan and Derek even tried a little gold panning and were ecstatic to find gold flakes at the bottom of their pans.  Off to town for a sarsaparilla!

While on the mine tour we met a local glass blower and her special guests who were in town to showcase their artistic glass blowing skills.  They invited us to attend their demonstration the next morning at their coffee shop housed in an old gas station.  Sounds like fun…

We started the morning with a great gas station breakfast and couldn’t pull ourselves away from the amazing glass blowing demonstration.  The team of artists created a glass bear head holding a glass trout.  Amazing and enthralling for all of us.

Although Deadwood has plenty more to draw us back again, we need to keep moving towards Denver for Marcy’s flight to London and have lots more to explore in The Black Hills of South Dakota. 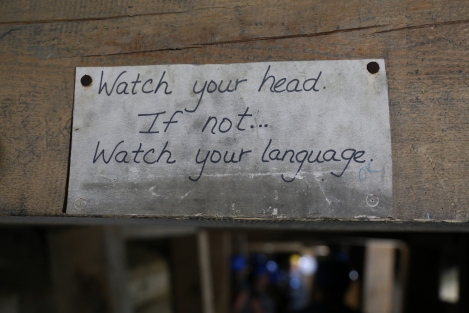 Advice from the Broken Boot Mine tour… Will Bill could have used this.

Although rebuilt after the fire, this is the site where Wild Bill Hickok was shot. 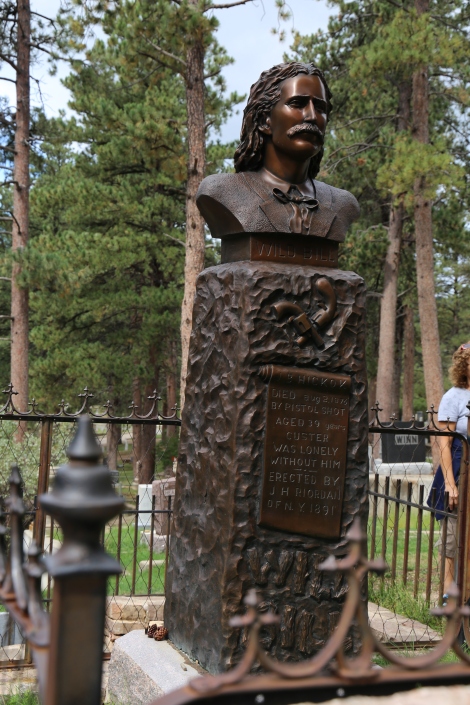 The famous Gem Saloon, rebuilt after the fire

Grant putting the final touches on this amazing glassblown bear