The kids and I rolled into the oil boomtown of Dickinson, ND on August 31.  Two days prior we had dropped Marcy at the airport in Fargo and had enjoyed a fairly simple drive across North Dakota with an overnight stay at Fort Abraham Lincoln Park just outside of Bismarck.  While at the park we studied the history of the area including the lives of the Plains Indians and were even able to visit the site of one of their villages overlooking the Missouri River.  The kids really enjoyed the rebuilt mud hut structures, and tried to imagine living life in a time when this was your only protection from the cold North Dakota winters.  We all took a minute to appreciate the life we live today.

In Dickinson we did a little food shopping to prepare for a long holiday weekend in Theodore Roosevelt National Park.  Marcy’s flight arrived on schedule and, united as a family once again, we enjoyed the comforts of a hotel.  The following morning we headed west toward to TRNP.

South Dakota is home to Badlands National Park, but in reality, Teddy Roosevelt Park is North Dakota’s version of those same badlands.  It has many of the same geological features, but because Teddy Roosevelt owned several ranches in this area the park bears his name.  Regardless of what name is on the sign, this is a special place with a cool history.

TRNP is divided into three units, south, north and Elkhorn ranch.  We started our adventure in the south unit and quickly stumbled upon a herd of wild horses grazing along the hillside.  Not long after, we drove through prairie dog town and into the campground where many of the campsites were already occupied…with bison.

We slowly eased into our site and commenced to enjoying the show.  Bison are known to be a bit dangerous, and your supposed to keep your distance, but these guys were more interested their prairie grass dinner than any of the onlookers, and simply fed their way through the campground.

We spent two days in the south unit where we attended Ranger talks, toured the park, and learned about Teddy Roosevelt’s time in North Dakota.  My next book is going to be a biography of Theodore Roosevelt.  He’s simply an amazing man with an amazing story.

He came to North Dakota following the deaths of his wife and mother on the same day.  Most say he came here as a broken man looking to work himself to death as a rancher.  However, North Dakota only made him tougher and more appreciative of the value of nature in healing the human sole.  Many of our National Parks are a result of Teddy’s dedication to preserving wilderness for others to enjoy as he did.  Thanks Teddy.

On Friday evening we attended the famous Madora Musical.  This was the kids first trip to the theater and we didn’t know what to expect but they were mesmerized by the singing and dancing.  We truly had a wonderful time at the show and left feeling patriotic, thankful, and tired.

The next morning, after a little shopping and lunch in Madora, we headed to the north unit.  With rain in the forecast we decided to see as much of the park as possible that evening.  The terrain of the north unit is a little rougher than the south with more badlands and less prairie.  We saw more bison, a flock of wild turkeys and several mule deer.  Although we didn’t see any pronghorn, we did learn a lot about them at the Ranger talk titled “the fast and the furriest”.

Pronghorns are not antelope.  They fill the same niche, but are not related in any way.  Additionally, pronghorn are the fastest distance runners on the planet with huge hearts, extra blood, and several other adaptations that allow them to outrun their predators.  Cool creatures indeed.

We woke to a rainy morning a decided to leave the park with our sights set on Deadwood, SD.

Camping among the Bison

The kids observing a head of bison

Morgan on “Pride Rock” with Chichi 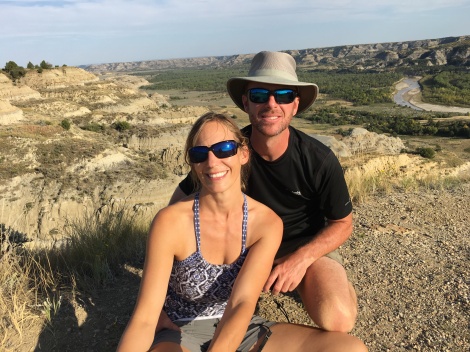 Overlooking the Missouri River in the North Unit

Morgan and Derek working on the JR Ranger booklets