After the “Glowfest” in Anna, TX, we headed to a small campground in the National Grasslands. We arrived after dark which always adds to the difficulty of finding a campsite, but everything worked out.

In the morning we awoke to a beautiful sunrise over the lake and were instantly reminded why we’re doing this.

The kids headed out to play with their animal figurines and I soon heard Morgan explaining to Derek, “They call this grasslands, but its mostly dirt”. The kids perspective is amazing.

Our neighbor was a young Marine from the local reserve branch and we chatted about the Corps and The Van. He also recommended another campground nearby that had a swimming beach.

Just before Noon the campground was a bustling place with everyone quickly packing their sites and loading their vehicles. By Noon the place was empty and we realized it was Sunday afternoon and the NFL games were about to kick off. Luckily, the Van is equipped with satellite radio, so I turned on the Pats game and listened happily as we destroyed the Bears.

Later we decided to head over to Bonham State Park for a change of scenery and a swim. Morgan jumped right in, but the rest of us didn’t quite have the guts to go for it.

The next morning we headed to Oklahoma, but stopped by the Bonham town playground to let the kids burn off some energy first. Somehow I don’t think our kids will have the same fear of the creepy van parked at the playground as we did growing up. 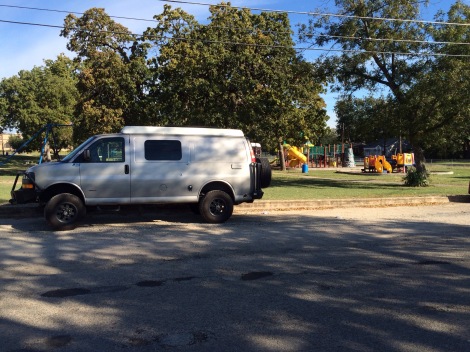